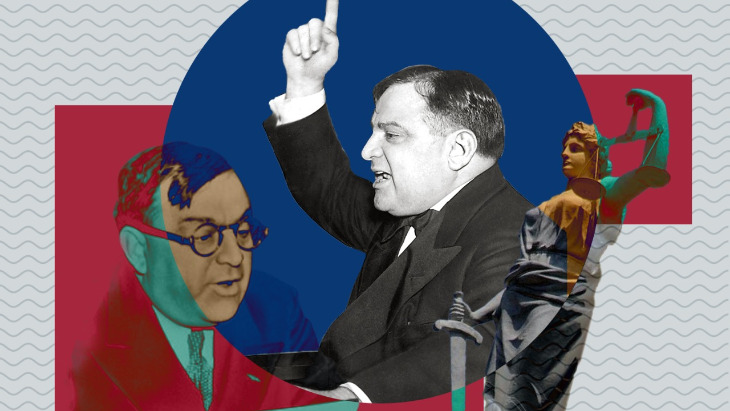 Long before New York’s La Guardia airport was built, Fiorello La Guardia, former mayor of New York, was an American icon. What many don’t realize is that the maverick leader was Jewish and his family’s Holocaust experience impacted his vociferous response to Hitler.

Born in Greenwich Village, New York, Fiorello Enrico Raeffaelo La Guardia was the son of Achille La Guardia, a lapsed Catholic native of Cerignola, Italy, and Irene Luzzatto Coen, a Jewish native of Trieste, then part of the Austro-Hungarian Empire. Enrico was eventually anglicized to Henry. Fiorello is Italian for little flower which is how the great leader was often referred.

Through his mother, La Guardia was a descendant of Rabbi Samuel David Luzzatto, a famous Italian leader of the Neo-Orthodoxy movement1 and a collateral descendant of the great kabbalist Rabbi Moshe Chaim Luzzatto.2 Neither parent practiced their religion, but a Jewish pride was instilled deep inside. Little La Guardia was even taught to recite Shema Yisrael before bedtime by his mother3. La Guardia’s Jewish roots would not be widely known to the public until after he was elected Mayor of New York. No matter what his parents practiced, Fiorello Henry La Guardia was born a Jew. 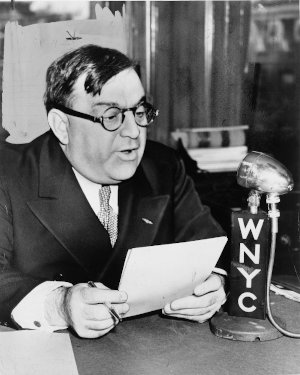 After having trouble securing steady work in New York and then Arizona, Achille La Guardia moved the family back to Europe. It was here that young Fiorello would get his first taste of government, working in the US Consulate in Budapest. With higher ambitions, the little flower left his family behind and returned to his native New York in 1906 with an eye on politics.

After graduating from NYU School of Law in 1910 and a failed bid for US Representative in 1914, La Guardia was appointed Deputy Attorney General of New York in 1915. The next year, a second congressional bid would prove successful. In 1919 he narrowly won victory in a special election for President of the New York City Board of Aldermen, New York City’s unicameral legislature that was active until 1937. He resigned from Congress to take this position. In 1921 he made his first bid at the mayorship, but lost in the Republican primary.

Frank accused LaGuardia of being an antisemite. La Guardia responded by dictating an open letter to the Jewish community in Yiddish, and challenged Frank to a debate in the mama lashon.

In 1922, he ran again against Henry Frank, a Jew, in a bid to return to Congress in Washington. In classical political mudslinging, Frank accused LaGuardia of being an antisemite. La Guardia responded by dictating an open letter to the Jewish community in Yiddish, and challenged Frank to a debate in the mama lashon. La Guardia was fluent in Yiddish; Frank wasn’t. He declined the invitation4. Fiorello won and returned to Congress where he served until 1933. In 1929, he won his party’s nomination for Mayor of New York, but was defeated in the general election5.

At this time in American politics, the rock-solid association of Republicans as Conservatives and Democrats as Liberals had not yet taken place. This realignment would not happen until President Franklin Delano Roosevelt’s New Deal Coalition which would become the dominant force of the Democratic Party until the 60s.6 The Conservative Coalition would take the reins of the Republican Party during the same time.7 During the realignment, many personalities moved back and forth between and within the parties. While La Guardia was a card-carrying Republican his whole life, he was so deeply allied with the President that he even held a quasi-cabinet level position for some time as the Director of the Office of Civilian Defense8. He entered congress at the end of the Progressive Era of American politics and worked to keep the candle burning until it was championed by President Roosevelt in 1933.9

La Guardia finally made it to City Hall propelled as a “Fusion Candidate” with the support of Republicans, reform minded Democrats, and Independents. He appealed to previously underrepresented groups in New York such as Italian Catholics, Jews, Protestants, and Backs.10 Through his three terms and 12 years in office, La Guardia’s fingerprints are all over New York City until this day. As an architect and champion of the New Deal, he oversaw $1.1 billion pumped into the city. These funds led to the building of The West Side Highway, East River Drive, Brooklyn Battery Tunnel, Triborough Bridge, both of the city’s airports, and to major improvements in the city’s subway system.11

At the same time that America was trying to climb out of the Great Depression, many were alarmed by the rise of the Nazis in Germany, but few raised their voices. A noted exception was Fiorello Henry La Guardia. The US Secretary of State at the time of the Nazi ascent was Cordell Hull12 who, until Kristallnacht,13 tried tirelessly to reconcile the differences between Germany and America. La Guardia was a frequent thorn in the side. In June 1933, six months before assuming the mayorship, he was a keynote speaker at the National Conference Against Racial Persecution in Germany. In his speech he called Hitler “a perverted maniac” and that “part of his program is the complete annihilation of the Jews in Germany.” He even came out in favor of a boycott of German goods in New York.

In 1933 La Guardia called Hitler “a perverted maniac” and that “part of his program is the complete annihilation of the Jews in Germany.” He was publicly “outed” as a Jew by the Nazis just before his swearing in as Mayor.

La Guardia was first publicly “outed” as a Jew by the Nazis just before his swearing in as Mayor.14 His Jewish roots had not been publicly known or discussed. The Mayor-elect shrugged off the event saying, “I never thought I had enough Jewish blood in my veins to justify boasting about it.”15 Hans Luther, the German Ambassador to the US, regularly visited the Secretary of State and demanded that the “troublesome mayor” be silenced.16 The little flower would continue to put the full weight of City Hall against the Nazis long before most others in America were ready to do so.

La Guardia stood up to the Nazis long before anyone else was ready to. In July 1935, a German immigrant named Paul Kress applied for a masseur’s licence in New York. Under America’s “Treaty of Friendship” with Germany, the craftsman’s German licence should have been recognized in the US. La Guardia reduced the licence. “Treaties are based on reciprocity. It is well known that American citizens of the Jewish faith have been discriminated against in Germany. That being the case, I cannot see how the German Government can insist upon alleged rights contained in the treaty on which they now rely.”

The Jewish community saw a Mayor who was standing up for their European co-religionists—not because they were Jews, but because it was the right thing to do. They loved him for it, and would continue to vote for him again and again.17

La Guardia’s Sister Was Sent to a Concentration Camp

When La Guardia returned to New York as a young man, the rest of his family remained in Europe. His sister Gemma married a Jewish man named Herman Gluck. The couple settled in Hungary. Anti-Jewish laws predated the Nazi invasion by six years. After the Nazi takeover in 1944, Gemma and Herman were rounded up by the Gestapo. Eichmann and Himmler knew that Gemma was the sister of the troublesome mayor and had the couple sent to the Mauthausen Concentration Camp where she was held as a political prisoner for ‘eventual political use.’ She was later transferred to Ravensbrück. Unbeknownst to Gemma, her daughter and baby grandson were prisoners in the same camp.

When the Germans abandoned the camp upon the Soviet’s advance, Gemma was able to reconnect with her daughter and grandson. Both her husband and son-in-law had been murdered. The three had a terrible time in postwar, Soviet-controlled Berlin living as displaced persons. Eventually, Gemma was able to get a message to La Guardia who was now the Director General United Nations Relief and Rehabilitation Administration (UNRRA). While he got them on the immigration list, he made it clear that no nepotism would be used and no exceptions would be made.

That being said, he used his knowledge of the system and did whatever a brother could do to get them out. The family was finally united in New York in May of 1947.18 Before Gemma’s imigration, LaGuardia had signed an affidavit that he would take care of her and her family financially. It was not to be so.

Upon Gemma’s landing, La Guardia was already quite sick and frail. He passed away just four months after his sister arrived, never having the opportunity to truly take care of her financially. She lived as an impoverished immigrant in Queens until her passing in 1962.

Although La Guardia stood a mere 5’2, in some ways he was larger than life. What possessed him to leave his family behind to pursue a higher calling? Why did every minority love him? In the messy field of politics, how did he maintain such a clean reputation? Why did he take such a strong stand against Hitler, years before everyone else was forced to pivot away from appeasement?

Our tradition teaches that every Jewish soul stood at Mt. Sinai and experienced the giving of the Torah, the source of the aforementioned characteristics that La Guardia exemplified. Even if that soul does not have the privilege to be raised as a proud Jew with a proper Jewish education, there still burns inside a Jewish spark that often pushes through. Perhaps it was that Jewish spark that nurtured the little flower who became Fiorello Henry La Guardia.