How We Did It

The Shontel Brown Special Election Democratic Primary victory was truly a monumental one. As is almost always the case, it took an army.  The goal of this article is not to take away from any other contributing unit as every one was vital.  My goal is to show how the Orthodox Jewish element of the campaign was mobilized.

Shontel Brown thanks her Jewish brothers and sisters

February 23:  I received the following email with the subject line “Shontel Brown” from my friend and Board Member of the organization I run, Elissa Wuliger:

Hi!! Have you heard of Shontel Brown? She’s running for Congress in your district and she’s pretty great.  I’d love to talk you about the race and get your thoughts on outreach when you have time.  I’m hosting a virtual event for her on March 11 at 7:30…email invite is coming soon (hopefully tomorrow) but I want you to know 🙂

In the followup conversation that took place, Ms. Wulliger not only sang the praises of Shontel, but also mentioned some of the negative statements and associations of Nina Turner.  It was relayed that one of Turner’s goals was to go to Washington to expand the Squad.  My wife and I attended the virtual event on March 11, and were both impressed with what we saw and equally alarmed by the potential of a Squad member representing them.

Following the March meeting, I began casually talking to people about the campaign, and became more and more surprised and alarmed with every conversation.  Surprised that no one, not even those who are usually politically tuned in, knew anything about the race, and equally alarmed as to what that would mean for the future of Ohio District 11, the United States Congress, the US-Israel relationship, and ultimately the Jewish People.

April 26: I became the first Rabbi to officially endorse Shontel.

May 14,: Just days before Shavuos, I wrote the following email to the Orthodox Rabbinate of Cleveland:

For those of you who know me, I usually stay far away from politics. But, the OH-11 race, the race to replace Marcia Fudge in Congress, is different.  I believe that yesterday’s Jewish Insider article (linked here) says it all.

In short, there are two top contenders for the Democratic Nomination.  In this district, whoever wins the August 3 Democratic Primary, wins the general election.  Shontel Brown is a moderate democrat and has received endorsements from every pro-Israel group. On the other hand, Nina Turner is a progressive and is receiving tons of money from progressive PACs from across the country.  She has been endorsed by the likes of Ilhan Omar, Rashida Tlaib, Alexandria Ocasio-Cortez (AOC), and Bernie Sanders.  If elected, she has promised to go to D.C. to “grow the Squad.” In light of the recent terror in Eretz Yisroel, she tweeted “solidarity is a verb” referring to solidarity with Hamas.

I hope that you can see my concern for this election, and the negative effect it could have on Acheinu B’nei Yisroel in Eretz Yisroel as well as right here in our community.  Therefore, I am asking you to join me in endorsing Shontel Brown. I am reaching out to every Orthodox Rabbi in our community to add their name to the list of clergy supporting Shontel.  Please let me know if we can include your name.

Anyone can vote in the Democratic Primary.  It does not matter how one has voted in the past, or how one intends to vote in the general election.  I feel we must encourage all Yidden to vote in the Primary on August 3 for Shontel Brown.

I am happy to jump on a call to discuss further after Yom Tov if you would like.

Have a great Shabbos and Yom Tov.

The above email only further ignited the drive within me to get involved. Out of the 21 Rabbis who received the email only one even acknowledged receiving it.  At this point, two things kept recurring in my head.  First, the words of Hillel from Pirkei Avos (2:6): In a place where there are no men, strive to be a man. This had served as a personal mantra of mine since high school.  The ultimate proverbial voice in my head that drove me to action was that of Rabbi Herman Neuberger zt”l, the founding Executive Vice President of the Ner Israel Rabbinical College (my alma mater).  Rabbi Neuberger was someone who stood up for the Jewish people and rolled up his sleeves wherever and whenever it was needed.  Whether it was saving Iranian Jewry or lobbying for issues of Jewish concern with local politicians, Rabbi Neuberger always led the charge.  Almost every time Rabbi Neuberger would speak to the Yeshiva’s student body, the topic was “Achrayus – taking responsibility.” As if Rabbi Neuberger was whispering in my ear from above, I sprang into action.

May 24: I had my first meeting with Brian Peters, the Campaign Manager.  I picked up a bunch of yard signs, and got to work. By this time, other things were happening.  Several philanthropists in the Orthodox community hosted a fundraiser where over $50,000 was raised for the campaign. Pro-Israel PACs had started to coordinate with local grassroots efforts.  A number of Meet and Greets were hosted within the Jewish Community. The message was getting out, but the clock was ticking.

June 1: I began working on an endorsement video. My wife and I are digital marketing professionals.  We put our skills towards making a high quality video and distributing it through social media channels such as Facebook, Twitter, WhatsApp, etc.  To date the video has gotten tens of thousands of views, and has been shared hundreds of times. This further helped to wake up Cleveland’s Orthodox Community as so many could now see and hear a familiar face and voice summarize the need for action in the two and a half minute clip.  The grassroots efforts continued to swell.

Shontel signs started showing up throughout the community.  Volunteers checked and rechecked voters registration logs to make sure that all potential voters were registered.  The combination of a voters bloc of 1650 voting households (2-5 voters per house), the realization that voter turnout would be low, and still the large number of community members that were still in the dark continued to pour gas on the fire. Seeing as the primary was August 3 when so many people are away, a big push was made to request vote by mail ballots.

By this point, the fire had spread to the east coast.

July 13: A community leader in Maryland (where I used to live) organized three 2020 graduates from Talmudical Academy in Baltimore to volunteer. Together with my son Moshe Abba, the group of four went door to door within the Orthodox Community, stood outside Jewish stores, and visited local synagogues.  They had direct conversations with anyone and everyone on the importance of the race.  They signed up absentee voters, and hand delivered all the applications to the Board of Elections for processing. When locals saw volunteers FROM ANOTHER STATE giving up their summer vacation to get involved, the fire continued to spread.

July 27: Turner supporters had taken notice of my regular “pro Shontel”  Tweets, and began to harass me on Twitter.  They began to circulate a picture of me and Shontel as a reason to vote for Turner with captions like “The #OH11 will be decided by Dems who stand with Palestinians or Dems who support human rights abuse & apartheid.  Which side are you on?” Such tweets just poured more fuel on the fire. 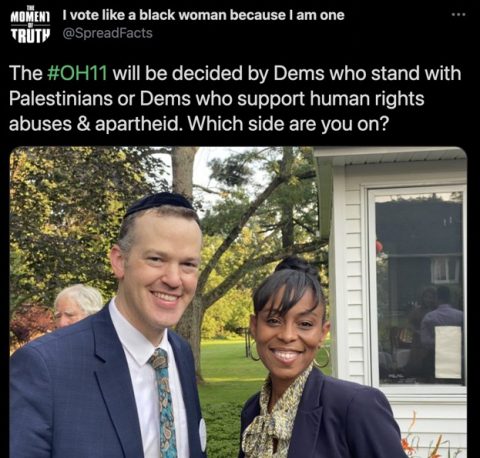 July 27: I facilitated, through the Brown campaign, three modern Orthodox guys from Maryland to come to Cleveland to mobilize the Orthodox community for Shontel Brown. These volunteers were motivated by a desire to defend a strong US-Israel alliance, and to stem the tide of extremism in both political parties. They knocked doors in Orthodox areas, educating the community about Shontel and why voting for her is extremely important.

The volunteers’ work continues with door knocking and standing outside the newly opened Grove supermarket. They also added phone numbers from the Mikvah list, which is an older handbook of all Cleveland Orthodox community members, to a master spreadsheet of all residents of the community who needed to be contacted about voting.

August 1: I left for a vacation that was planned before we even knew who Shontel Brown was.  Yet, continued to “canvass” from my iPhone and cross platform social media posting. I setup a WhatsApp broadcast list of over 400 to make the final push throughout election day to get out the vote.

Our Maryland volunteers meet with community leaders involved in politics for advice, and link up with politically active community members. Throughout the day, the volunteers were connecting with those community members, and planning for election day. After that, they helped set up a Shontel event at a Black church, where she would be speaking alongside House majority whip Jim Clyburn and House Foreign Affairs Committee chairman Gregory Meeks. Though this wasn’t specifically Frum outreach, it was one of the most memorable parts of the trip for the volunteers, and was a window into the relationship between the Black church and the Democratic Party.

August 2: Our crew was joined by a fifth out-of-state volunteer, an organizer from New York who just came off the DA race. The volunteers knocked doors and prepared intensively for election day. Part of these preparations was locating where “high traffic” areas were — i.e. places where dozens or even hundreds of Orthodox Jews would be walking through on election day — and how we as volunteers could engage those areas. Working with community organizers, we decided that putting volunteers at morning Shacharis minyans (prayer services), car-pool lines, and some Jewish stores would be effective.

11 volunteers in Baltimore call over 400 voters in the evening leaving personal appeals to vote. These volunteers used the phone numbers that the MD volunteers put into a spreadsheet of the community.

August 3: Beginning at the early hour of 6:40am, MD volunteers (with the help of a local volunteer, Ari Jaffe) were positioned at those “high-traffic areas.” At the minyans, they gave out small brownies and orange juice, and between the five Shuls that volunteers were at, they engaged hundreds of Orthodox voters. Interactions ranged from “kol hakavod” (good job in Hebrew) and “hatzlacha” (good luck in Hebrew) to “Where do I vote,” or “who am I voting for?” And some just wanted a brownie! We then went to campaign HQ, where we sent text messages to voters all over the district.